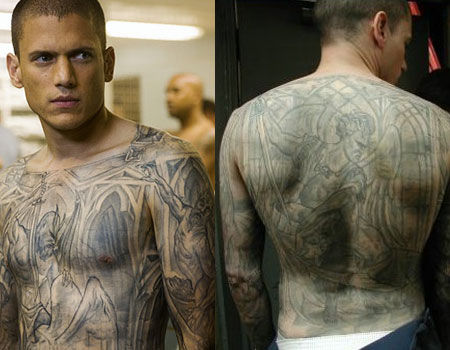 Have you seen the TV-show Prison Break? Michael Scofield is an engineer and considered a genius. His brother, Lincoln Burrows, is innocent but is sentenced to death. In the beginning, Michael is the only one who believes in his brother’s innocence, and plans for his escape. After four months of research he has discovered the prison’s blueprint, which he then tattoos onto his body, and everything is planned in detail. Michael commits armed robbery to be locked into the same prison as Lincoln, and the plan to escape the prison begins.

What surprised me the most is the extent of information Michael has tattooed on his body.  An example of this is a 10 digit telephone number. I believe that anyone, in a short amount of time, can memorize a 10 digit telephone number. With Memo, people may remember thousands of digits in just a few hours. When I was on tv2 in 2006 I was able to teach three people how to memorize 1000 decimals of pi, in 10 hours. The digits were recited flawlessly.

The eyes are there to remember who the numbers belong to, and possibly to act as a diversion, to keep the numbers from getting too much attention. The eyes were removed on the original tattoo to save space, the numbers were also changed.

Prison Break is an amazing TV-show, and the tattoo plot is creative. However, the engineer and genius, Michael Scofield, would not have endured the pain of having a 10 digit telephone number tattooed, when he could have memorized it in seconds or minutes with perfect recall (perfect recall is essential, especially to include long term memory).This is not the only digits and information he has tattooed. By the help of good techniques, even a blind hen could have memorized the majority of Scofield tattoo.  A great story, a great character, but there is a character flaw to the story.

My intention is not to attack the students, but to give some well-meant advice. Medicine students have a lot to remember. Still, some of them do not use any memorization techniques. There might be several reasons for that:

*Some think that Memo will get in the way of understanding. But let’s look at a scenario: You pass by a car accident, with a severely hurt person. You will either remember CPR or you won’t remember CPR. The patient will not care how you remember as long as you do. Also read the article about memory versus understanding (to be translated into English soon)

*Some have misunderstood Memo. In the first Memo books I was a little imprecise in relation to studying. It is better explained in Best of Memo, and the risk of misunderstandings is less now. (how much one store in one spot, reduction, the robot trap, and so on)

I did some private tutoring for medicine students a few years ago. Medicine students in Poland, Hungary, etc. often have to memorize more than medicine students in Norway, but regardless, there are enormous amounts of knowledge to remember. I am very surprised when I hear about people who want to go through the study and not memorize. It would be like saying: I am going to read and cram again and again in hopes of remembering as much as possible.

I have great respect for students wanting to understand the curriculum, which is the most important part. However, the fact of the matter is that the students are required to remember a lot of things too. Memory techniques are somewhat like sitting in a boat. Then ten fish jump over the boat. You might be able to catch a few. Using memory technique is like using a fish net, and you catch all ten. We have a technique, a structure to remember the curriculum. It is extremely challenging to remember page after page without using this kind of tool.

Neither Michael Scofield, or people in general, are created to cram, it has only been the past few generations of human existence where there has been so much theory, so many digits and details to remember. It is no mystery why humans struggle with remembering. But the solution is not to cram. To memorize is much more natural and more effective.

My tip is: At least try the techniques. You will most likely master them, and you will save a lot of time and effort. That is the purpose; to use less time remembering, and more time doing other things.